Today, I'm partnering with Basil Bandwagon Natural Market, a natural food store featuring certified organic food products and locally produced goods. I'm so glad that the buyers at Basil Bandwagon take the time to make sure that the finest, integrity-based products are found on their shelves. I sourced all the ingredients for my cinnamon rolls recipe from there. You can learn more about Basil Bandwagon HERE.

You can't deny it... There's something about hot-from-the-oven, soft, fluffy homemade baked treats that puts anyone in a good mood. These homemade vegan cinnamon rolls have all the flavor and texture of any traditional recipe.

Making vegan cinnamon rolls from scratch is so worth it. All that gooey, delicious goodness slathered with vanilla glaze...these rolls are much better than any you'd get at the store. This is the perfect recipe for brunch, Sunday breakfast and for taking to potlucks.

Cinnamon rolls are predicted to have originated from Sweden, where they are known as kanelbullar.

Bakers in Northern Europe began working with rich, butter-infused yeast doughs in the mid-1700s. The French took it a step further and shaped them into buns, and then the Dutch tried frying them in oil.

Meanwhile, the British came up with a type of currant bun called the Chelsea bun, while the Germans invented the schnecken - a bun rolled with sugar and currants. These treats laid the groundwork for the Swedes to add cinnamon to buns, making the very first cinnamon rolls.

In Sweden, cinnamon buns are often enjoyed during fika - Swedish coffee break where one takes time out of their day to sit down with others and share pastries and coffee.

Fun fact: October 4 is National Cinnamon Roll Day. This day was first celebrated in 1999 in Sweden when the Hembakningsrådet (Home Baking Council) celebrated its 40th anniversary, and it became a yearly tradition. 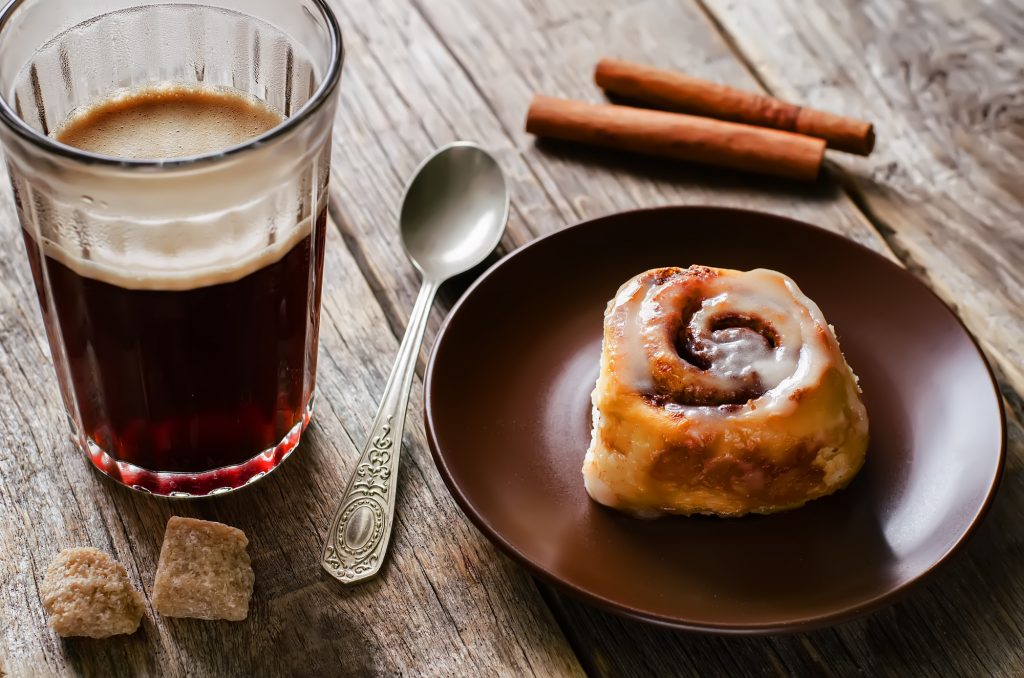 Why The World Loves Cinnamon Rolls

The smell. Even if you're not craving a cinnamon roll, the moment you walk into a mall, airport, or kitchen and you're hit with that telltale smell of cinnamon and brown sugar, you're done.

The taste. Fluffy spirals of buttery dough filled with swirls of warm cinnamon and sugar that melt in your mouth like a warm hug...need I say more?

The versatility. There's a whole lot that you can do with cinnamon rolls apart from the classic roll. You can add different flavors to them, like pumpkin pie spice. You can make them in various shapes like twists, croissants, or pull-apart bread. Some even stuff them inside of donuts! (Just another fun fact, not a recommendation!)

The inspiration. The smell of cinnamon rolls has inspired recipes for pancakes, waffles, bread pudding, ice-cream, popcorn, and even vodka. And, of course, we can't forget the scented candles, shampoo, and air fresheners.

How To Make Vegan Cinnamon Rolls At Home

You might think that making vegan cinnamon rolls from scratch is a big deal, but it's pretty easy. You don't even need a stand mixer or bread machine. But be warned - it's not quick. The dough has to rise two separate times. However, once you bite into the warm cinnamon rolls fresh from the oven and drizzled with icing, it's all so worth it. 😋😋 Mixing the dough. Start by combining melted vegan butter, warm almond milk and raw sugar in a pan and put it on low heat. One of the key elements to making this recipe turn out perfect is getting the milk warmed up just right - not too hot and not too cold. Think bathwater! A kitchen thermometer can be used to make sure that the mixture reaches 100 degrees Fahrenheit. This temperature is best for activating the yeast.

Stir in the yeast and let the mixture for a few minutes. It should become foamy. If the yeast still looks the same after about 5 minutes, then it might be from a bad batch or expired (and the dough won't rise properly). Combine the yeast mixture with 2 cups of flour in a large glass bowl and add the sea salt. Mix everything until it's just combined. Cover the bowl with plastic wrap or a towel and leave it to rise for about an hour.

Making the rolls. Add ¼ cup of flour to the dough and incorporate it completely. Turn it out onto a lightly floured surface and knead the dough until it's nice and pliable. Shape it into a large rectangle and liberally brush on some softened vegan butter. You want it on quite thick. Generously sprinkle the brown sugar and cinnamon, leaving a border around the edges. Roll the dough into a log (I use parchment paper under the dough before shaping it into the rectangle to make this part easier). Slice it into even rolls. You can use a serrated knife for this (some use dental floss). I prefer to use my knife or this handy pastry cutter.

Place the rolls in a greased round baking tin, cover them with plastic wrap or a towel, and set them aside to rise for another 30 minutes. Space them out a bit as they will spread out as they rise.

Baking the rolls. Pop the rolls into the oven at 350 degrees Fahrenheit for 30 minutes, until they're lightly golden brown. Let them cool for a little bit before drizzling them with the glaze.

Making the glaze. In a bowl, mix powdered sugar, vanilla extract and just a splash of almond milk until smooth. Depending on the consistency you want, you can either add more sugar or milk. Drizzle evenly over the rolls. Enjoy! * The instructional video has been sponsored by Basil Bandwagon Natural Market. All thoughts and opinions are my own.

**Disclaimer: This blog post contains affiliate links, which means I may receive a commission for purchases made through them.